The Pornographic Side of Colonialism´s Hidden History
(Multimedia Performance)

IMPORTANT: UNDER NO CIRCUMSTANCES DO WE CLAIM TO BELONG TO ANY ABORIGINAL COMMUNITY. WE ARE MESTIZOS, AND BY BEING IMMIGRANTS IN EUROPE WE RECOGNIZE THE PRIVILEGE OF BEING HERE, TALKING ABOUT THIS, WHILE THE SURVIVING VICTIMS OF THE RAVAGES CAUSED BY THE MULTIPLE BUSINESSES OF COLONIALISM AND CAPITALISM ARE STILL RESISTING IF THEY HAVEN’T DESISTED, FIGHTING AND DYING IF THEY CAN’T BE FORCEDLY SUBMITTED TO THIS IMPOSED SYSTEM. WE ARE A CHANNEL, WE ARE COMMUNICATION, WE ARE MISCEGENATION, WE ARE BASTARDS,
WE ARE RAGE, WE ARE DECOLONIZATION.

*(1) Abya Yala, which in the Kuna language means “land in its full maturity” or “land of vital blood”, is the name used by the ancient Native American nation Kuna people, that used to inhabit near the Darien Gap (today North West Colombia and South East Panama) to refer to the American continent since before the Columbus arrival.
Miguelángel López-Hernández (2004). Encuentros en los senderos de Abya Yala. Editorial Abya Yala. ISBN 978- 9978-22-363-5. Retrieved 11 May 2013. 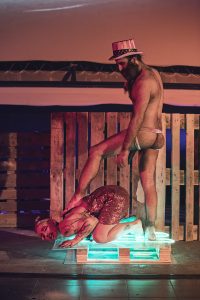 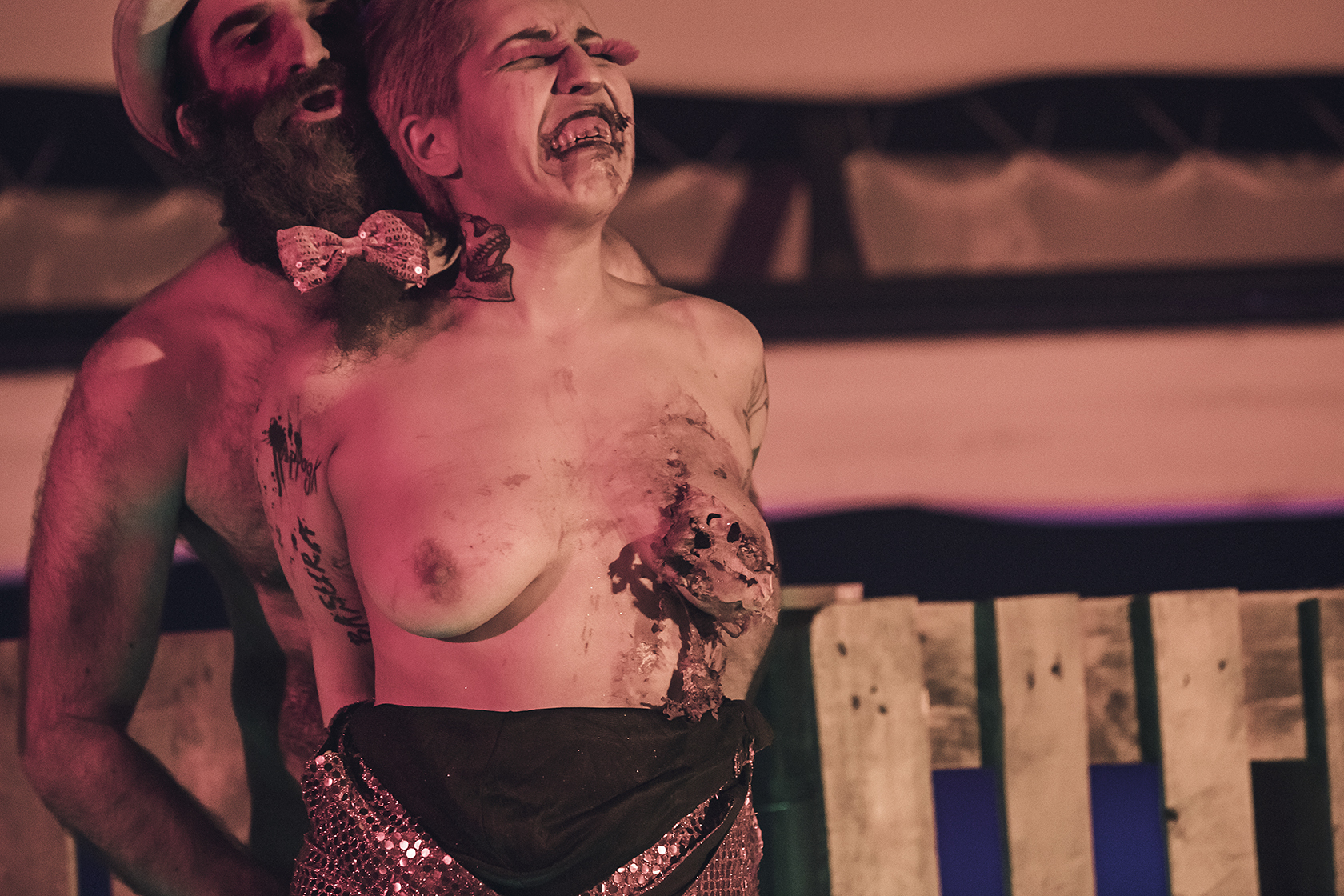 This is a work of investigation and interpretation totally self-managed, in constant evolution and modification, therefore every representation has been different to the former ones and each time it exists the necessity of investigating and digging even more. In current presentations we make emphasis on the Selk’nam genocide (aboriginal tribe from the now Chilean and Argentinean Patagonia), as on the kidnapping, forced displacement and exhibition of these people, among many other indigenous from all over the world in the so-called Ethnological Expositions*(2)—very popular in Europe specially during the 19th and 20th century—to become entertainment attractions and subjects of scientific interest for white men. We also point out how Chile’s government, since its very beginning, have been giving away lands which now are being exploited and their surrounding nature destroyed by the heirs of this ethnic cleansing’s authors, whose legacies not only involve multiple mega-industries but also being considered pioneers and heroes in the lands they have fisted and keep fisting carelessly and without prior consent, while the few remaining natives are still fighting for the survival of their cultures.

This is where our previous performance “Human Zoos” meets “Forced Syncretism”*(3), both artworks connected by history and abuse, giving birth to our theatrical play “Thirst for Revenge”, in which we also introduce our political docu-porn film project
“Fuck the Fascism”.

*(2) The Human Zoo: The Story of Calafate. Full Documentary https://www.youtube.com/watch?v=XXN5DFGZNCQ

*(3) This two Artworks, authored by Maria Basura, have their roots in Antofagasta in collaboration with Roberto Polanco, city where Basura and Jorge are originally from. Antofagasta is in the north of Chile and it´s the capital of mining.

Human Zoos was already presented in “Festival Annulé” Toulouse, France; “La Feria de los Monstruos” Madrid, Spain; “Queer Mutante Panik Party” Brussels, Belgium; and in “Queer Take Over, KÖPI’s Birthday Gala” Berlin, Germany. In this last presentation, for the first time, we had a few reactions against us from some white European people who felt offended for the rawness of our performance, calling us racists for not being dark-skinned enough to talk about it *(4). We know that by studying, exposing and representing this hidden history we make ourselves somehow accomplices of this aberrant facts, which provoke a mix of fascination and horror, but it’s a burden we accept to carry as the cost of the truth. Because the only real death is oblivion, and we are not willing to forget them; that’s why we make this performance “despite everything”, because no matter how brutal and inhumane this show can be, it will never reach the cruelty of reality.

“Thirst of Revenge: The Pornographic Side Of Colonialism’s Hidden History” was premiered at the Pornfilmfestival Berlin in October 2016.